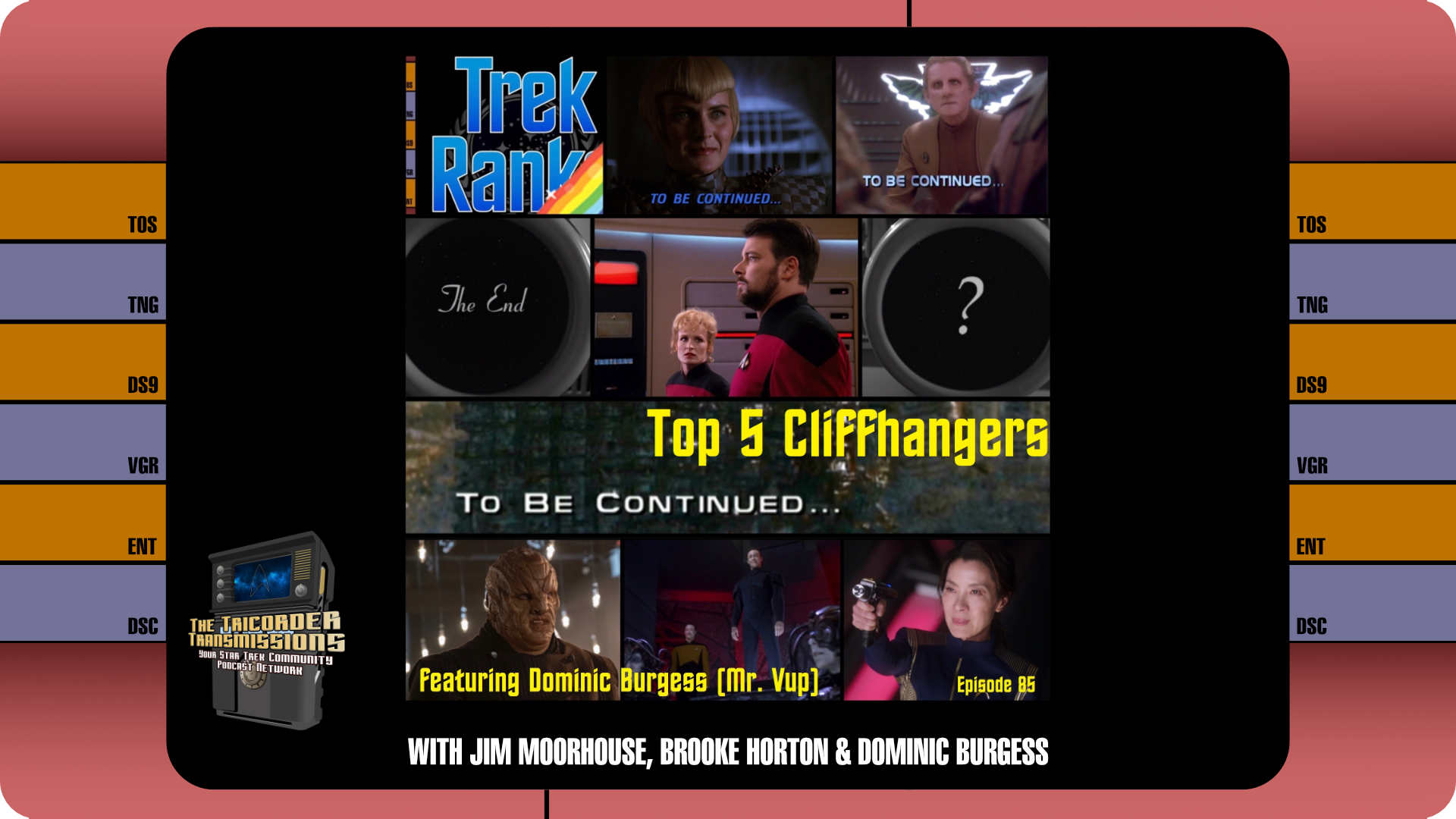 This week's special episode of TrekRanks not only features a classic Star Trek topic, but also a classic Star Trek guest. We tackle the Top 5 Cliffhangers on Episode 85 of TrekRanks and are joined by Brooke Horton and actor Dominic Burgess, a Star Trek fanatic who played Mr. Vup on Star Trek: Picard. From big action moments to quiet character reveals, Trek cliffhangers come in all shapes and sizes, and our expert panel covers it all across 50-plus years.

As everyone's favorite sentient reptiloid from Beta Annari, Burgess has been seen in a number of classic genre shows including The Good Place, Dr. Who, Supernatural and The Magicians. In Picard, Burgess left an immediate impression on fans as Bjayzl's muscle and right-hand reptile in the episode "Stardust City Rag." And he will leave an even bigger impression with you on this episode of TrekRanks with his amazing Star Trek knowledge.

After a brief introduction of Dominic, we get the show started with our Diagnostic Cycle to quickly define what a cliffhanger in Star Trek is, just to make sure there are no surprises – since we all know Mr. Vup does not like surprises!

We then jump into everyone's Prime Directives to figure out exactly how our panel narrowed down their lists and came up with their picks. In The Order of Things, Jim, Brooke and Dom each relay their five-word summaries and a hashtag before unveiling their Top 5 Cliffhangers.

Of course, one segment is not enough to contain all those thrilling moments, so this week's Secondary Systems is once again chock full of additional picks that takes the conversation even deeper. After all is said and done, our panel recaps their picks in the Regeneration Cycle and then Jim breaks down a few interesting statistical anomalies that emerged from the selections.

The episode concludes with a visit into a Temporal Causality Loop where we quite appropriately flashback to Episode 80 and the Top 5 Season 1 Picard Moments (and then play with a little Beta Annari fire by unveiling a few last second surprises for Mr. Vup).

As always, make sure to hail us at 609-512-LLAP (5527) and record your own personal TrekRanks log to let us know your Top 5 Cliffhangers. Your comments might be used via a Temporal Causality Loop in an upcoming episode. And your recording might also be considered as an audition to be a future TrekRanks' guest.

And do not forget to check out TrekRanks.com for our entire back catalog of episodes and a detailed rundown on every episode of Star Trek ever.